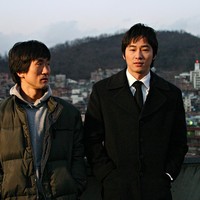 Ho-jun has a minor and inadequate position lecturing on film at a university. He is divorced and has lost custody of his young son. Having been denied access to his son and then refused a full-time job, he becomes depressed. The only human beings who show any interest in him in this alien world are prostitutes and Jehovah’s Witnesses. Until now Ho-jun has angrily rejected these “messengers of good tidings” and he locks himself away from them. Then, one day, Fate sends the missionary Gye-sang his way. But even he has his problems: he refuses to do his military service, and not only due to his religious convictions. The exhausted Ho-jun considers the initially pious Gye-sang an uninvited guest, but he gradually opens up his heart to him, while Gye-sang tries to break down the psychological wall between them.